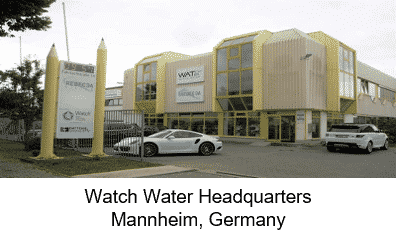 Watch® Water with its headquarter in Mannheim, Germany, is one of the fastest growing companies in manufacturing scale prevention, absorbers, filter media, and instant dosing solutions for water and waste water treatment industries.

We offer world class products and systems on building long term satisfaction and commitment with our customers. We have over 45 branches working throughout North and South America, Europe, Asia, Africa and Australia. We help our customers to learn green chemistry and save million$ of dollar$ every year. Our highly trusted high-performance absorbers are known to all of the world. New product development is a key factor in the Watch® Water’s success story.

In December 2017, Murphy Kormos, was approached about a filter that not only would reduce scale, but also eliminate existing scale. Murphy has over 15 years in the C-Store business and had spent the last 4 years in the craft coffee business. Like everyone else, he had bought every filter out there with the hopes that he would come across one that would actually work. He will be the first to admit he has bought his fair share of snake oil. But what did he have to lose? Nothing else worked. He tried the special filter on a problem coffee brewer in the Phoenix area. Just after (2) weeks, he started to see the scale peel off the equipment. (Please see the photos below of the coffee brewer that changed Murphy’s life.) He called and asked if this product was legal in the US and where has it been all his life. Why hadn’t anyone ever introduce this product before?

Watch Water’s primary focus has been on projects of a larger scale, municipalities, environmental, etc. on the wholesale side. In May 2018, Murphy became the founder of ScaleX Pro with the focus on bringing Watch Water’s plethora of products to solve scale and other water issues to these industries:

ScaleX Pro may be new to water treatment but our staff has over 100 years of experience dealing with and solving various challenges presented in commercial industries due to water problems. ScaleX Pro is the exclusive distributor of the Special Filter by Watch Water, which is the only filter on the market that prevents scale and removes existing scale without changing pH or TDS.
This represents the tip of the iceberg of Watch Water technology and treatment applications.

Check out our dealer highlight on www.wqpmag.com